A workflow automates any kinds of manual operations. You’ll define a sequence of tasks as workflow, then Digdag keeps running it for you. Tasks are defined using operator plugins so that you can control various kinds of systems from the central workflow engine (see also list of built-in operator plugins).

As the runtime framework of the plugins, Digdag takes care of the rest of issues around workload automation so that you can focus on automation. If a task fails, Digdag sends an alerts. If the workflow doesn’t finish within expected amount of time, Digdag sends a notification. Digdag starts workflow automatically based on scheduling options.

Tasks can run on local machine, distributed servers, or in a Docker container.

As you automate complex workflow, the definition becomes complicated quickly. Using Digdag, you can organize tasks into groups. When you review the definition, you will see from a bird’s view, then dive in to details. It makes it easy to debug and review your workflow during development. In production environment, it helps administrators to know what’s happening and how to fix problems. 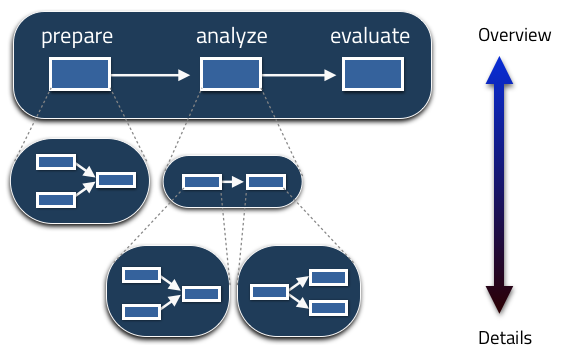 A task starts if there’re no dependent siblings, or all of them successfully completed. When a parent of a group runs, it runs its children. When all of them completed successfully, their parent also completes successfully. But when a child failed, the failed child and its parent also fails. The entire execution finishes when the root task completes or fails.

Grouping tasks is used also for passing parameters between tasks. A parent task can export variables for children tasks (as like UNIX shell’s export command sets environment variables). A parent can generate children tasks at run time so that it can run different tasks depending on the results of previous tasks. See defining variables section for details. 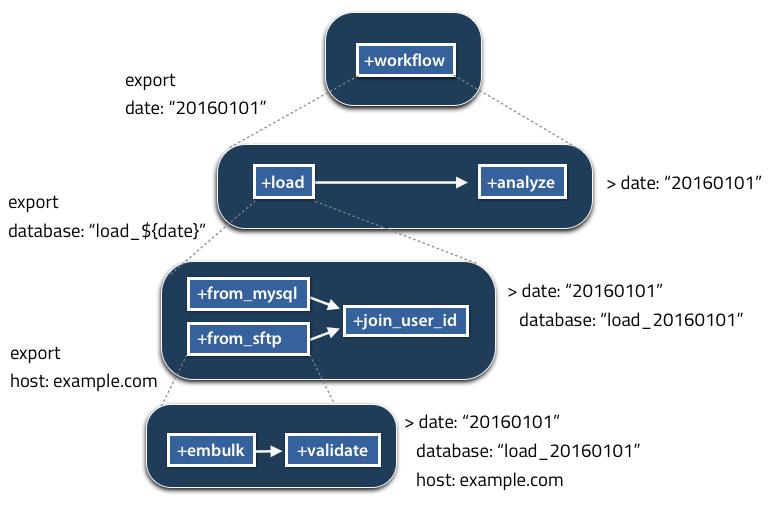 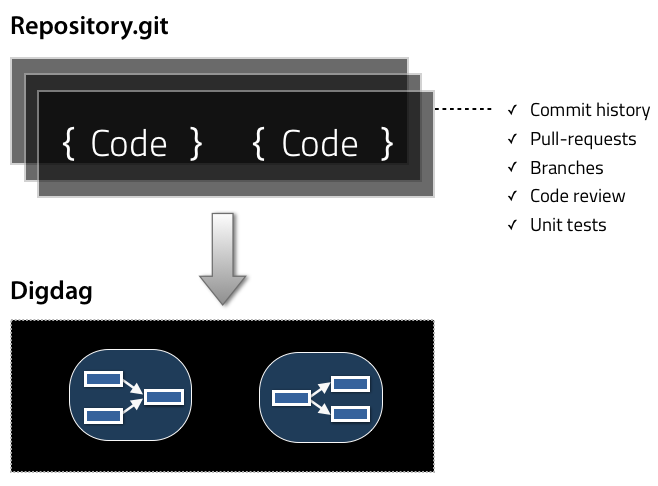 Digdag workflow is defined as code. This brings best practice of software development: version management, code review, tests, and collaboration using pull-requests. You can push a workflow to a git repository, and anyone can pull it to reproduce the same results with you.

Digdag is a single-file executable command. Creating and running a new workflow is as easy as Makefile.

Once you developed and tested a workflow on a local machine, you will want to push it to a server so that the workflow runs periodically.

Running on a server¶

Files with *.dig suffix and other files at the same directory are called project. You can push an entire project to a Digdag server so that Digdag server runs workflows on the server.

You can use Docker to run tasks in a container. If docker option is set, tasks run in a docker container.

Digdag caches pulled image and reuses it. By default, currently, Digdag uses the cached image consistently even if there is an update. You can set pull_always: true option so that Digdag checks update and pulls the latest image of the tag every time when a task starts.